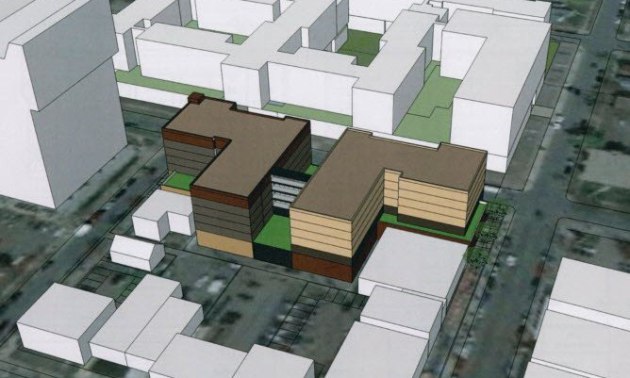 A development boom reaching into the University of Minnesota’s Dinkytown area has ignited efforts to protect the neighborhood’s vibrant fabric of small storefronts and eclectic businesses that have catered to generations of students.

Neighbors and business owners poured into the basement of a church earlier this month for the first glimpse of Opus Development Company’s plans to replace half a block in the heart of Dinkytown with a six-story apartment building. Down the block from Al’s Breakfast, a culinary award-winning eatery, the massive proposal represents one of the first attempts to significantly alter the four-block area that makes up Dinkytown.

“It’s on our watch,” local resident Gordon Kepner told the crowded room. “Are we going to be the ones that say, ‘OK, Dinkytown went a completely different direction from the way it has evolved over all these years’?”

Stopping Opus’ project is a long shot, but the push to shape it mirrors debate in other Minneapolis neighborhoods as residents seek a balance between increased density and preservation of core characteristics.

“We often get the feeling that we’re building the airplane while we’re flying it with these areas,” said Haila Maze, a long-range planner for the city who is working with the neighborhood on an updated plan for the area. “Things are changing under our feet.”

‘Have to have change’.  It was nearly inevitable that the debate would reach Dinkytown. Spurred by student housing demand, apartments are springing up or being proposed consistently in the Marcy-Holmes neighborhood surrounding the Dinkytown commercial node, particularly along 4th Street and University Avenue SE.

Business owners and some residents say they generally don’t oppose the development activity, but worry that parking will disappear and small shops will fall victim to higher rents. Laurel Bauer, who owns the House of Hanson convenience store on 14th Avenue SE., said she lost a third of her business when a CVS pharmacy anchored a new apartment building several blocks way.

That, and the threat of a grocery store moving into a new apartment complex replacing the old Marshall High School across the street, is why she’s offered to sell her property to Opus. Opus’ plans — which remain in their early stages — would replace several parking lots, a row of businesses, a small apartment complex and a nearby pizza place with two conjoined buildings featuring ground-level retail.

The sale would spell the end for House of Hanson, which has been there 81 years, and also evict the Book House and the Podium music shop — which are 37 and 54 years old, respectively. An artful mural on the rear of the weathered, 1970s-era building boasts of their longevity, but proximity to parking lots made for an appetizing development opportunity.

“We have to have change. Change is what makes things happen,” Bauer said at the community meeting, noting that she had to be proactive to protect her family. “I think this project is excellent. I think it’s going to be an improvement. It’s going to bring people.”

Book House owner Kristen Eide-Tollefson predicts that what is now “a little urban village” will fall prey to high rents and tall buildings that will erase the area’s distinctive character. “I really am concerned about losing Dinkytown,” she said.

Those fears are echoed at the 14-stool counter of Al’s Breakfast, where co-owner Doug Grina worries that his business could be next, since he rents the property. The 10-foot-wide diner was once named one of the state’s most interesting architectural sites, he said, “but I don’t know that that means anything to the people who have money and want to make more.”

Longtime resident Carol Strom said the existing properties could be improved upon, but she opposes the height of the new developments. “They’ve just got so many now it’s just going to be one big downtown with no character,” she said.

While the planned changes are controversial, they have yet to ignite the tensions of 40 years ago on the same block, when a Red Barn fast-food restaurant tried to open where a post office is now located.

College-age protesters led a weeks-long standoff in which they picketed and occupied vacant buildings slated for demolition. Police dragged protesters out minutes before the buildings were razed, according to press reports. The Red Barn was never built.

Changing shape:  Part of the rising interest in developing Dinkytown stems from the changing habits of University of Minnesota students. “It’s always historically been much more of a commuter school,” said local developer Kelly Doran, who is behind many of the buildings springing up in the area. “That’s changing.”

Dinkytown itself has become more of an entertainment destination, which has changed the makeup of the businesses. Doug Carlson, president of the Marcy-Holmes neighborhood association board, said that means bars and coffee shops have replaced amenities like bakeries, florists and hardware stores.

Skott Johnson, who heads the Dinkytown Business Association, has watched several developments gobble up needed parking and displace small businesses. Business parking is a growing concern, since the Marshall High project will temporarily eliminate parking and the Opus project would be built atop vital shared parking lots.

“That’s an ideal situation that everybody walks and bikes here, but it’s not the case,” said Johnson, who has seen customers in his copy and print shop complain that they couldn’t find parking spaces. “I would say most of the students have a car.”

But accommodating business parking in the new residential developments is tricky, since city ordinances require developers to provide a certain number of spots for residents. Council Member Gary Schiff, who chairs the zoning and planning committee, says a particular rule requiring extra resident parking for student housing in the area needs to change.

“We need to modify the parking requirements for Dinkytown before mistakes get built,” said Schiff.

But regardless of the fate of the project, the area itself has already changed fundamentally.

“When I talk to people who went to college here 20 or 30 years ago, they say the same thing,” observed Amy Knutson, who works at a local salon. “Dinkytown doesn’t look anything like it used to.”