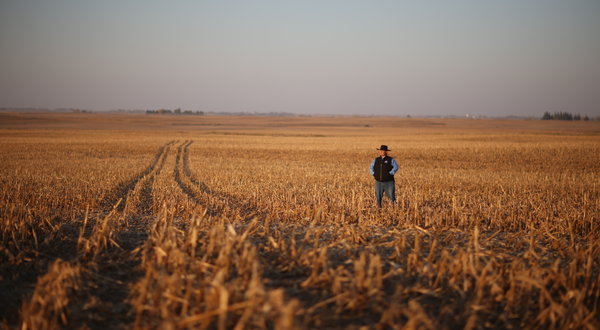 EAGLE GROVE, Iowa — After initially trickling in slower than the auctioneer’s babble, the bids began picking up.  Marv Huntrods, an auctioneer, with Gaylord Jones, who was a winning bidder at the Eagle Grove auction last week.  An auction attendee took a bidder number and a calculator in Eagle Grove.

“Get your hands up,” belted Marv Huntrods, the auctioneer, his baritone echoing from a raspy speaker in a plaid-carpeted Masonic lodge here last week. He chopped the air with one hand and drew out his vowels.

After about 15 minutes and a starting bid of $6,000 per acre, Mr. Huntrods, an agent with Hertz Farm Management, ended up with more than he had expected. A former John Deere dealer bought the 80-acre farm plot at a stunning price of $10,600 per acre. Mr. Huntrods had thought it would fetch less than $9,500 per acre.

Across the nation’s Corn Belt, even as the worst drought in more than 50 years has destroyed what was expected to be a record corn crop and reduced yields to their lowest level in 17 years, farmland prices have continued to rise. From Nebraska to Illinois, farmers seeking more land to plant and outside investors looking for a better long-term investment than stocks and bonds continue to buy farmland, taking advantage of low interest rates.

And despite a few warnings from bankers, the farmland boom shows no signs of slowing. Almost every year since 2005, except during the start of the recession in 2008, agriculture land prices have posted double-digit gains. In the same period, the Standard & Poor’s 500-stock index has had double-digit gains in only three of those years.

An August survey by the Federal Reserve Bank of Chicago showed a 15 percent increase in farmland prices since last year across a region that covers Iowa, Illinois, Indiana, Wisconsin and Michigan. Another survey released at the same time from the Federal Reserve Bank of Kansas City showed even higher growth in the Great Plains states, where farmland prices have increased 26 percent since last year.

The two Fed surveys and sales data have raised concerns from bank regulators about a potential farmland bubble, similar to the housing frenzy that helped set off the financial crisis. A year ago, rising farmland prices prompted regulators to warn banks not to relax lending standards. In July, the Kansas City Fed held a symposium to discuss concerns about a bubble.

“Any time you have an asset that doubles in value over a decade, there is cause for concern about how sustainable that growth is,” said Richard A. Brown, chief economist at the Federal Deposit Insurance Corporation.

For farmers in the land hunt, a potential bubble was barely a concern. Many said they needed to buy more land to expand their businesses so they can generate more income. And in this wobbly economy, they found safety in stashing their money in farmland.

“What’s a C.D. at the bank? Half a percent,” said Clark Wadle, who attended the auction. “What’s the stock market? Unstable. Whether land prices go up or they go down again, you still have the property.”

The winning bidder, Gaylord Jones of Eagle Grove, said that buying farmland was a way to invest on his own terms.

The worst drought in decades this summer seemed a distant memory here as about two dozen farmers escaped the cold and rain for the coffee-and-cookie-infused air inside the lodge where the auction was held.

In some cases, the drought has benefited farmers seeking land. Brent Kuehnast, who bought 190 acres this summer to add to the roughly 1,200 his family owns, said the drought helped him negotiate a below-market price on the property near his home in Humboldt, Iowa.

But the drought also caused some anxiety over his purchase.

On a recent afternoon, as his pickup truck bobbed like a vessel in choppy water over the dirt of his new plot, Mr. Kuehnast, 44, smiled when asked how often he inspected his new land, which he will start farming next year.

“All the time,” he said. “I like to find out where it needs to be improved.”

No state has benefited more from the farmland boom than Iowa.

According to an agriculture land survey by Iowa State University, prices have risen 32 percent since 2010. Statewide, farmland prices averaged $6,700 an acre, the highest ever, even after adjusting for inflation. Four years ago, prices averaged $3,900 an acre.

Because of the strong demand for farmland, banking regulators fear that farmers could take on more debt to make purchases, a repeat of the 1970s and early 1980s, when overleveraged farmers used their farms as collateral to buy up more land. The resulting debt led to a slew of bankruptcies and plummeting land values.

Those days are fresh in the mind of John Kintzle, 68, who lives near Cedar Rapids and attended the auction here in north-central Iowa just to observe. Back then, he said, prices dropped from $3,000 an acre to $1,000 an acre in three years.

“I’m a little gun-shy,” he said, though he added that he was open to purchasing. “My wife thinks I’m nuts.”

Economists say that so far there are few signs of a repeat of those days.

Agriculture Department data show that net farm income is expected to increase to $122 billion this year from $117 billion in 2011, a 4 percent increase even with the effects of the drought. That’s the highest income level since 1973 on an inflation-adjusted basis. Economists say farmland values are getting a boost from corn and soybean prices, which had reached records highs because of the drought.

Farmers are carrying less debt than they were 30 years ago, and low interest rates are also a factor because they make it less costly for farmers to borrow. The federal crop insurance program also plays a role in keeping farmland prices high, by covering a majority of losses in revenue or crop yields.

Regulators, however, say that despite the continued growth in farmland prices there are reasons to be cautious. Some lenders have reported that a number of farmers are taking out loans based on the current value of their land to take advantage of the farmland boom.

Fed officials and some real estate brokers said these buyers could be in trouble if interest rates rose and crop prices fell. This could cause farmland values to drop by a third to a half, putting farmers at risk of default. Another risk is that if the drought stretches into multiple years, it could interrupt the boom in farmland prices, officials said.

But that was not something to worry about, said Brian Wagner, who stopped his bidding at the auction because he thought values would eventually drop, allowing him to buy a better piece of land at a lower price.

“That would be like me asking you, ‘When you get in your car or on the bus, do you think about getting into an accident?’ ” he said. “Accidents happen randomly. Droughts come and droughts go. They don’t come very often.”

Instagram did not return a 200. Follow Me!
Additional Downtown Apartments Iowa Farm Values Up 23%
Scroll to top