The Old Village project in Lake Elmo just got a new push forward.  Two large parcels of land have been put on the market, ready for developers to grab.

For sale are a 263-acre plot and another that could be nearly as big, according to city administrator Dean Zuleger. END_OF_DOCUMENT_TOKEN_TO_BE_REPLACED

One of the largest real estate projects in Minneapolis history, announced Tuesday, would transform a largely barren stretch of downtown that has long struggled to attract investment.

The $400 million proposal would target a five-block area near the new Vikings stadium, adding offices, residential housing, retail and an 9-acre park, according to developer Ryan Cos. City officials hope the proposed project will generate even more development in the years ahead. END_OF_DOCUMENT_TOKEN_TO_BE_REPLACED

Mount Development, which for more than a year has tried to build a medical office building along Edina’s France Avenue, has radically shifted its plans. It now wants to build an assisted living complex instead.

Mount filed plans with the city on May 1 that superficially resemble those for the 102,000-square-foot office building that had been approved for the site, at 6500 France Ave. It’s the same height (62 feet) and style, but is intended for specialized senior services instead of physician offices. END_OF_DOCUMENT_TOKEN_TO_BE_REPLACED Rooftop gardens and community access to wetlands next to the development are two of the features of a new apartment project planned in Minnetonka by Minneapolis-based CPM Development.

The 93-unit market rate apartment project is slated for an area near the southwest corner of the intersection of Highway 169 and Minnetonka Boulevard (County Road 5).  The four-story project, called Tonka on the Creek, backs up to Minnehaha Creek. END_OF_DOCUMENT_TOKEN_TO_BE_REPLACED

United Properties continues to play an important role in downtown Minneapolis. The developer most recently closed on the empty Neiman Marcus store at 505 Nicollett Mall in downtown. United Properties says it will now renovate the 100,000-square-foot building. END_OF_DOCUMENT_TOKEN_TO_BE_REPLACED 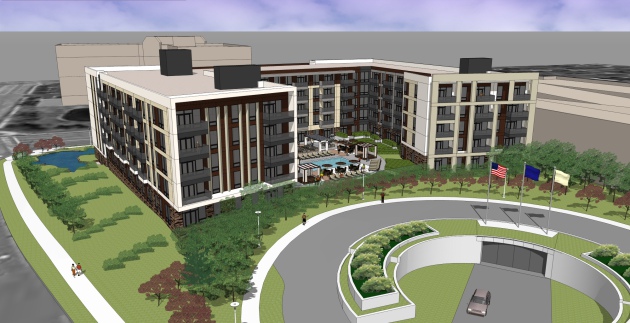 Dallas-based Trammell Crow Co. said this morning that it plans to begin construction this fall on 165 luxury apartments in Golden Valley. The Arcata will built on a 2-acre site near The Shops at West End. It’ll be adjacent to the Colonnade Office Tower and south of Golden Hills Office Center on Golden Hills Drive. END_OF_DOCUMENT_TOKEN_TO_BE_REPLACED

Housing construction in the Twin Cities was up more than 110 percent, making it one of the best Aprils in nearly a decade.

Throughout the 13-county metro area, builders were issued 372 permits to build 817 apartments and single-family houses, according to a report from the Builders Association of the Twin Cities. Luxury rentals in two new downtown buildings accounted for nearly 60 percent of those units, but a shortage of home listings helped boost permits to build single-family houses by nearly 27 percent. END_OF_DOCUMENT_TOKEN_TO_BE_REPLACED The site, located at the corner of First Avenue North and 8th Street North, is the same site where Turnstone Group recently suspended plans for a nine-story apartment building due to recent increases in construction costs. END_OF_DOCUMENT_TOKEN_TO_BE_REPLACED

Episcopal Homes will break ground Wednesday on a $45 million senior housing complex at the site of the former Porky’s Drive-In in St. Paul.